Your Sneakers Make Me Sick 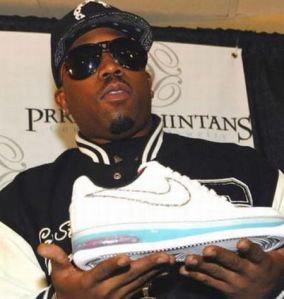 We all know that status and consumption go together like lobster and champagne. The high status people get the finer things in life, and the highest status people get the finest things of all. In pre-modern societies the relationship between status and consumption was made explicit through the enactment of sumptuary laws – rules about whom in a society could possess rare or scarce goods.

The effect of such laws on other members of society has always been a matter of some uncertainty. The Elizabethans thought that sumptuary laws actually benefited the lower classes by reducing the temptation to fall into debt. The Statute issued at Greenwich by Elizabeth I in 1574 states:

“The excess of apparel and the superfluity of unnecessary foreign wares [should be restricted to prevent the] wasting and undoing of a great number of young gentlemen, otherwise serviceable, and others seeking by show of apparel to be esteemed as gentlemen, who, allured by the vain show of those things, do not only consume themselves, their goods, and lands which their parents left unto them, but also run into such debts and shifts as they cannot live out of danger of laws without attempting unlawful acts, whereby they are not any ways serviceable to their country as otherwise they might be.”

Corsets and codpieces may have gone out of fashion, but the paternalistic argument for protecting people from the excesses of consumption has not. At least not entirely.

One popular account for the recent financial crisis in the United States is that American households were living far beyond their means, and financing their spending with risky home mortgages rather than with solid savings. The investment bankers selling this bad debt either did not appreciate the risk or did not particularly care as long as they got paid, and could buy that extra house in the Hamptons. But why were Americans living beyond their means in the first place? One explanation is that they were “allured by the vain show of those things,” that is to say, that American consumers became too focused on becoming conspicuous consumers.

The conservative version of this argument is that Americans have lost their way, and become too undisciplined. A qualified version of this argument was made in the New York Times this week: “Shedding debt is a lot like shedding pounds. It involves slow, steady, disciplined effort before it yields substantial results. It means passing up short-term pleasures for longer-term gains. And getting rid of debt, like getting rid of extra weight, is a do-it-yourself activity for most people.”

Commentators on the left also perceive a crisis in over-consumption, but they blame the machinery of late industrial capitalism, and all the spending that it encourages through relentless marketing, for the current excesses. This is the basic thesis advanced by contemporary theorists such as Fredric Jameson (whom I find impenetrable). He refers to: “new types of consumption; planned obsolence; an ever more rapid rhythm of fashion and styling changes; the penetration of advertising, television and the media generally to a hitherto unparalleled degree throughout society.” (p. 206)

Enter the current debate on the effect of inequality and health. Adherents of the relative deprivation hypothesis see patterns of over-consumption, and living beyond one’s means, as a manifestation of status anxiety and a desire to live up to the expanding material expectations of society. The culprit is income inequality. Growing inequality heightens the need for individuals to differentiate themselves from their neighbors through patterns of consumption, while undermining other forms of social control that limit unbridled excesses. I am told that when Dutch people acquire nice things they keep them in their home, but Americans are much more likely to flaunt them to outsiders. The Economist suggested an explanation in a recent article. Inequality increases the attractiveness positional goods (those goods that acquire value in relation to the goods of others):

“Owning the latest gadget or garment is particularly attractive when others don’t have it, rather as buildings are valuable because of their location: ie, how desirable they seem to others. With such goods, a rising tide does not lift all boats. You yearn to be not merely richer, but richer than your neighbours. So the more brands, fashion and houses become important, the more relative income and inequality matter.”

My first instinct was that perhaps positional goods matter most to the readers of the Economist – upper middle class professionals anxious to show other middle class people that they read the Economist (you know who you are, I’ve seen you on the train). But this recent article by Elizabeth Sweet in the American Journal of Public Health makes me rethink the issue. In particular, the author points out that growing inequality shifts the frame of reference within a society, causing even people in relatively impoverished circumstances to compare themselves with much more affluent peers. Sweet’s own research on urban youth finds that high levels of identification with symbols of consumer culture such as fancy cell phones, sneakers, and clothing predicted higher blood pressure (indicating higher stress on the causal pathway to worse health).

So is it time to return to sumptuary laws? Not quite. But I think there is a genuine social norms problem here. Other commentators have compared income inequality to the prisoner’s dilemma: each participant would be better off with more equal outcomes, but none would unilaterally benefit from lowering his position. I would not go that far, but I do wonder whether paternalistic measures aimed at blunting the consumption effects of inequality, such as school uniforms or counter-marketing against excessive consumerism would be effective at changing social norms and improving health. There may be a small-scale experiment here.

I am a postdoctoral fellow at the University of Pennsylvania in the Robert Wood Johnson Health and Society Scholars Program. I completed a PhD in health policy at Harvard in 2012. My current research focuses on children's health, public programs, racial/ethnic disparities, and mental health. I am also interested in justice and health care.
View all posts by Brendan Saloner →
This entry was posted in Blog posts and tagged effects of inequality, health. Bookmark the permalink.

2 Responses to Your Sneakers Make Me Sick