Alcohol and the irrelevance of inequality

Almost every day, we’re fed another piece of inequality in the news – another example of the gap between the advantaged and the disadvantaged, another case where better-off parents have secured the successes of their children over the less well-off. Coming home from a fabulous BSA event on inequality last week, I felt flooded with inequalities and injustices of different forms from different countries, which seemed to form an unpickable web of unfairness.

Which is why, sometimes, we need to remind ourselves that not everything in life is linked to generalised advantage. One example is that higher-income women (unlike men) are less likely to have a partner, as Diederik has discussed on the blog.  But closer to my own experience, the examples I know best are about the very British behaviour of binge-drinking, which is the subject of this post…

If you pay attention to the popular press in the UK – particularly the Daily Mail and the Daily Express – then you’d be forgiven for thinking that binge-drinking was dominated by poorer people, the ‘chavs’ of the public imagination. But these aren’t the people who binge-drink the most. The chart below shows the picture using the latest official data, and defining binge-drinking as having more than double the daily recommended limits of 3 standard drinks for women and 4 standard drinks for men. (A standard drink is roughly one shot of spirits or a half-pint of beer). For both men and women, greater household income goes along with greater chances of binge-drinking – although the relative increase is greater among women. 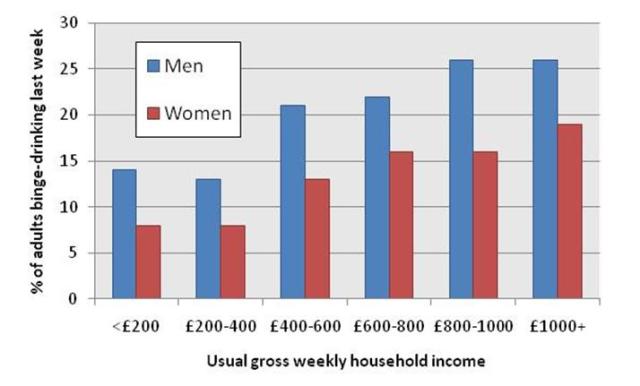 According to Wilkinson & Pickett’s The Spirit Level, it’s only for strongly class-patterned negative outcomes that we’d expect to see greater problems in more unequal countries. And this seems to be the case here – there’s simply no link between most measures of drinking and societal income inequality as measured by the Gini coefficient. This holds true for drunkenness among 11-15 year olds and overall levels of adult consumption (as argued by the interesting if sometimes flawed critique of The Spirit Level by Peter Saunders; see page 105) – and even this unusual comparison of villages in a pre-modern society. More informally, we know that relative rates of drunkenness (if not alcohol consumption per se) are high in the more equal Nordic countries, while the high-inequality UK and the US have completely different drinking cultures to each other.

The reappearance of inequality

Yet this doesn’t mean that alcohol and inequality researchers should go their separate ways – for there are three ways in which social advantage does make a reappearance.  Firstly, the UK is pretty unusual among high-income countries in showing that higher-income, higher-class men binge-drink more than others. While similar results are found in low—and middle-income countries, in most European countries it is low-educated men that are likely to drink the most. The picture for women is even more culturally variable; better-educated women are often heavier drinkers per se but it is unclear how this links to getting drunk. The relationship of gender, class, alcohol and societal factors is complex here, if enormously interesting.

Secondly, even in the UK, moderate drinking is much much more common in higher-income, higher-class people, reflecting the near-universal finding that people with more money are more likely to drink, and (in some countries) to drink more often. In the UK, 74% of people in households earning £1,000/wk or more drank last week, compared to only 46% in households on less than £200/wk. Among men, the chances of binge-drinking on any given drinking occasion is nearly always higher among the lower-educated. So even if binge-drinking is not heavily patterned by social advantage, other patterns of drinking are.

Finally, even though risky drinking is found across British society, the worst alcohol-related problems are much more common among disadvantaged groups – at least among men. The figure below (from Harrison & Gardiner 1999) covers deaths directly due to drinking, and men show a steep gradient across classes I-IV and an even steeper increase in risk for the lowest class. For women, though, the picture is more complex – if anything there is a reverse tendency where higher-class women are more likely to die from alcohol, with the exception of the highest rate being found in class III-M (of manual workers). 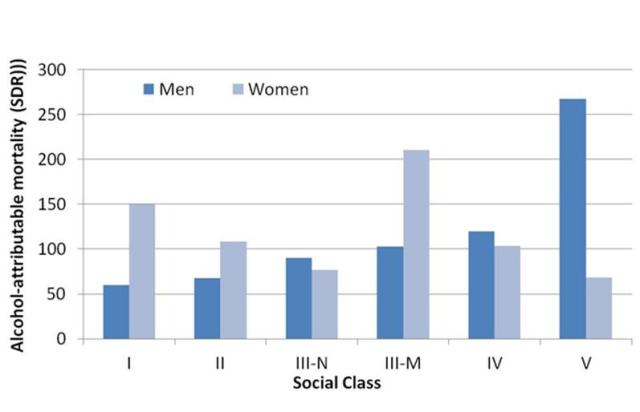 A further sign of the class-linked nature of alcohol deaths comes from Finland, where a recent drop in alcohol prices led to increases in alcohol-related mortality, which was larger – if only slightly larger – among those with low education, income or social class.

What it all means…

So alcohol is both an example of where inequality doesn’t matter, and (in other ways) also where it does – but to my mind the real significance goes beyond this. Drinking is a behaviour that is both positive and negative; it is at once a display of status, a use of scarce resources, and a pleasurable, social experience – and at the same time a way of coping with distress, a risk factor for more than 60 diseases and one of the most important causes of ill-health globally, and a cause of violence, addiction and spiralling social exclusion.

Alcohol’s relationship with the mechanisms of inequality are therefore complex – with different patterns of drinking and domains of harm showing different relationships to different domains of advantage. Moreover, alcohol is so tightly bound up with cultural factors that these processes work in different ways in different settings. Yet this is what offers the potential to really uncover something at a deep level about how inequality works – how inequality is played out for a behaviour that is finely balanced on the knife-edge between pleasure and problems. My hope is that researchers will return to unpicking the delicate mesh of inequality, not just for figuring out how to reduce alcohol problems, but as a way of getting to the heart of the deeper working of society.

(Further information can be found in the EU Alcohol in Europe report I co-authored with Peter Anderson back in 2006, particularly chapters 4-6.  If you’ve seen something post-2006 that I haven’t linked to, though, then please let me know!).

I am a Senior Lecturer in Sociology and Social Policy at the School of Social Policy, Sociology and Social Research (SSPSSR) at the University of Kent. I also helped set up the collaborative research blog Inequalities, where I write articles and short blog posts. I have a wide range of research interests, at the moment focusing on disability, the workplace, inequality, deservingness and the future of the benefits system, and the relationship between evidence and policy. You can find out more about me at http://www.benbgeiger.co.uk
View all posts by Ben Baumberg Geiger →
This entry was posted in Articles and tagged alcohol/drugs, cross-national research, gender. Bookmark the permalink.

10 Responses to Alcohol and the irrelevance of inequality