Last week Brendan described the results of a new NBER report that argued there was a contradiction between (i) declining mortality rates in the US/UK, and (ii) higher levels of disability benefits for people who are too sick to work. The implication of the NBER report is that these levels of disability claims aren’t ‘real’, something they cement by showing how changes in incentives lead to changes in disability/retirement behaviour.

But this is wrong. Or at least, the conclusions they come to aren’t justified by the evidence they present – and there are two reasons why.

In the lazy, everyday way we think about this thing called ‘health’, we assume that anything that makes us less likely to die makes us feel better on a day-to-day basis too. But there’s absolutely no reason why this should be true. If we get better at treating heart attacks, then people are less likely to die of heart attacks (as they overwhelmingly have done in recent decades) – but that doesn’t say anything about how many people are living with chronic back pain.

In fact, better medical care might even lead to more disability, if we get better at keeping disabled people alive when previously they would have died. Traumatic brain injuries after accidents are a good example of this; people are less likely to die from this, but in many cases these people have injuries they have to cope with for the rest of their lives. There’s a massive debate on whether the so-called ‘compression of morbidity’ is occurring – but this is mainly about changes at older ages, and among the working-age population there’s no a priori reason why  we’d expect people to be healthier than they used to be.

The only way of telling if working-age people are healthier than they used to be is to investigate their health directly. Unfortunately, though, we have no good, objective, summary measure of ‘health’, so instead we have to ask people to describe how healthy they are. In the UK, the trends in various global measures of ill-health are shown below – and none of these show an improvement of health over time. In fact, the measure of ‘poor health’ shosw a worsening of health over time. 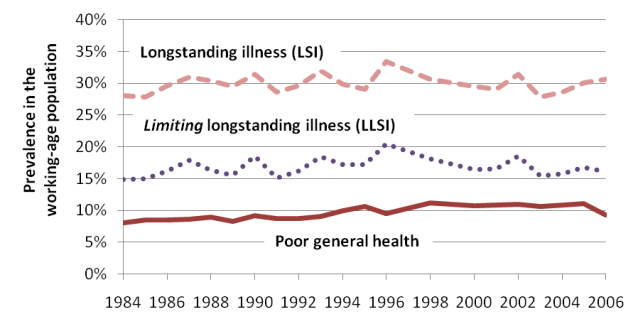 [Data taken from the General Household Survey; contact me for further details]

You might argue that these self-reported measures are hopelessly subjective, and that we *must* be healthier than we used to be. But if you check through the trends for specific conditions in the trend files of the Health Survey for England, you can see that obesity has been rising, and at least as many conditions that deteriorate as improve (heart disease vs. asthma, diabetes etc). Some of this will doubtlessly be due to changing medical practices. But there is simply no good evidence that we’re healthier than we used to be 20 years ago – even though we’re much less likely to die.

Health, work, and the ‘hidden unemployed’

Still, the NBER team are right to note that the substantial rise in disability claims isn’t matched by a wholesale deterioration in the health of the population (whatever headlines about rising obesity might suggest). The problem isn’t that there are many more people who are completely unable to work. Instead, the problem is that we still have lots of working-age people with health problems, and employers are less likely to give them jobs than they used to.

Tina Beatty, Steve Fothergill and colleagues have termed these the ‘hidden unemployed’, in what is now the most widely-accepted account of what’s been happening in the UK. Their most influential piece of research was a case study of Barrow-in-Furness – an industrial town in England that was highly dependent on a single industry (the construction of Trident nuclear submarines). When that industry disappeared, the unemployment rate in the town moved relatively little – but large numbers of extra people claimed disability benefits.

The way we should think about this, Beatty and Fothergill argue, is as a ‘queue for jobs’. In bad times, employers can be pickier about who they employ, and one of the things that affects their decision is someone’s health. Where labour demand is low, there is a longer queue for jobs and disabled people are more likely to be at the back of it. In their account, the problem is not that people are sicker, but that there simply aren’t enough jobs to go around.

For any economists reading, you might be flinching at what is often called the ‘lump of labour fallacy’ – the idea that there are a fixed number of jobs. There’s no space to get into this (unending…) debate here, but it’s worth remembering that the last 30 years have been a time of increasing global competition, which will only increase in future as I described a few weeks ago (and will come back to next week). I have a strong suspicion that the worklessness of people with health problems in rich countries is in some way a counterpoint to increasing jobs in low- and middle-income countries – but that’s for another day.

If you couldn’t guess, this is the subject of my entire thesis – but somehow I’ll force myself to stop! The point, though, is that the assumptions of the NBER report are wrong. Declining mortality doesn’t mean that people are healthier than they used to be. And what’s more, even if people are not unhealthier, employers could be more health-selective about the people they employ than they used to be. It’s easy to make strident claims about disability benefits, but the truth is more complex, and much trickier to do anything about…

I am a Senior Lecturer in Sociology and Social Policy at the School of Social Policy, Sociology and Social Research (SSPSSR) at the University of Kent. I also helped set up the collaborative research blog Inequalities, where (after a long break) I am again blogging about inequality-related policy & research. I have a wide range of research interests, at the moment focusing on the role of social science, disability, inequality, deservingness, and the future of the benefits system, and I co-lead the Welfare at a (Social) Distance project (on the benefits system during Covid-19). You can find out more about me at http://www.benbgeiger.co.uk
View all posts by Ben Baumberg Geiger →
This entry was posted in Articles and tagged globalization, health, welfare payments. Bookmark the permalink.

12 Responses to Living longer, yet less able to work