Leisure Inequality – What Do the Poor and Non-Poor Do For Fun? 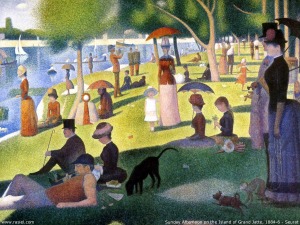 Oscar Wilde once said that “cultivated leisure is the aim of man,” by which he may have been thinking of the kinds of diversions that require wearing a tuxedo or concentrating for long hours in an edifying seminar. The truly cultivated leisures may be the province of the very privileged, but even the leisures of mainstream society – going to a museum, visiting a park, or catching a movie at the theater – are more socially divided than we often think.

To illustrate this point, I created a simple chart based on questions about leisure activities asked of adult respondents to the United States general social survey (GSS) since the 1990s. 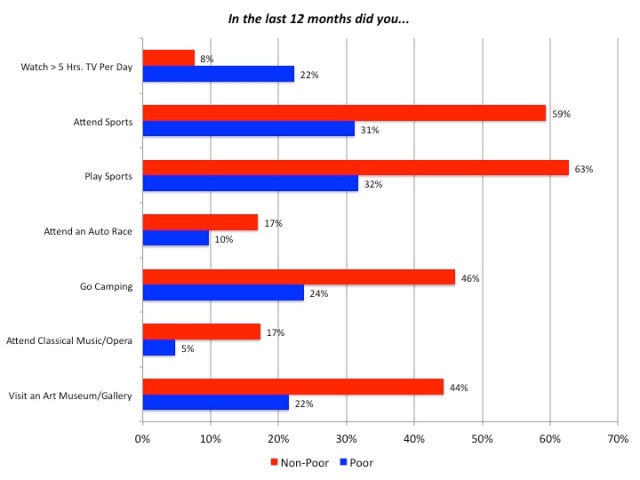 The chart reveals some stark differences in the leisure activities of the poor and non-poor. Around 60% of all non-poor respondents attended a sporting event or played sports in the previous year, double the percentage of poor individuals. The disparity is similar for camping (46% vs. 24%) and visiting an art museum (44% vs. 22%). The disparity is smaller for auto racing (17% vs. 10%), a sport by reputation that is enjoyed by blue-collar southerners. Attending classical music and the opera – the purview of the elite and the moneyed – is most dramatic (17% vs. 5%). The only leisure activity with higher participation among the poor is television watching: 22% of the poor report watching more than 5 hours of TV daily, compared to 8% of the non-poor.

A widely held view is that if the poor do not partake in various leisure activities it must be because they do not have a taste for them. Leisure can be understood as a democratic expression of our preferences, and some people would simply not prefer to stand around in a stuffy art gallery with a cocked head or sit through a marathon performance of Wagner’s “Der Ring des Nibelungen.” Although this conclusion has an elitist ring to it, there’s probably a grain of truth: taste is acquired through socialization, and some children grow up attending highly structured or formal cultural events, other children grow up hunting or fixing trucks, and others still grow up in families where the normal social activity is visiting with relatives and talking. These differences break down not only along the boundaries of social class, but also along other social divisions such as religion, gender, geography, politics, and ethnicity. Since tastes are socially reinforced, people with similar interests and values will tend to cluster together, raise their children to appreciate similar experiences, and reproduce similar patterns of leisure across generations.

A taste-based explanation may be partially accurate, but seems incomplete. First, many of the listed activities such as attending sports or going camping are (at least by reputation) enjoyed across boundaries of social class. Second, why should only active things, as opposed to passive TV watching, be more widely enjoyed by the non-poor? To explain this difference probably requires more than taste, it requires a conception of self-efficacy and knowledge.

A subtle refinement of a taste-based view incorporates cultural capital. To grossly simplify, the ability to pursue certain leisure activities requires more than an interest, it requires the possession of specific kinds of “know-how.” Like tastes, these kinds of know-how are socially transmitted. For example, anyone can walk through an art gallery and look at the paintings, but the ability to appreciate certain themes or styles requires a certain amount of cultural capital, acquired through formal or informal education. The same point can be made with regard to other forms of leisure – going to the symphony can be a disorienting experience if you have no conception of how people are expected to dress, when to clap, and how a program is structured. Because the poor are often more socially isolated, they lack the know-how to seek out certain forms of leisure, acquire the appropriate equipment or background knowledge, and converse with other people that appreciate those activities. The cultural capital argument can thus be distinguished from a simple taste view by pointing out that many poor individuals would like to participate in active forms of leisure, but do not have the knowledge to become participants, rather than spectators. This creates a paradox: now more than ever people can find different cultural experiences on television, but being able to participate in them is a widening chasm as communities become more segregated and income differences become more stark.

Money is the great social divider, and with leisure it is no different. All of the activities on the list require a modicum of income – ranging from a few dollars for a ball to several hundreds of dollars for concerts and sporting events. Although consumption data reveal that the poor do make purchases on leisure (my understanding is that) many of the purchase are for goods that can be used within the house, such as upgrading a television or buying amenities. Staying in the house may be a response to other barriers to free access among the poor – generally the parks in their neighborhoods are less safe, the distances to cultural events are farther, and the time flexibility to participate in outings is more difficult to come by. It never ceases to surprise me, however, that the poor often fail to take advantage of public amenities that are used by outsiders near their homes. For example, here in Boston the Arnold Arboretum is located in a relatively affluent neighborhood that borders on lower and mixed income areas. The park – which is free to enter – is almost exclusively patronized by white, middle and upper income families.

Ever since the creation of public spaces, questions of leisure have been a private matter with public implications. Social commentators worry about whether public amenities are being used by low-income families and efforts are made to promote cultural exposure for children attending underprivileged schools. These efforts are certainly laudable, but my sense is that we cannot make much progress on leisure inequality until we have a clearer grasp of how poor individuals perceive the types of amenities available in their communities, and what types of amenities families would like to have available for themselves and for their children. Rather than devolving into a debate about whether privileged social planners are paternalistically imposing their vision of leisure on the poor, conversations with different segments of the poor and near-poor might help to spur inclusion and point to directions where community members would like to expand their horizons, and move from being spectators to participants in leisure activities.

I am a postdoctoral fellow at the University of Pennsylvania in the Robert Wood Johnson Health and Society Scholars Program. I completed a PhD in health policy at Harvard in 2012. My current research focuses on children's health, public programs, racial/ethnic disparities, and mental health. I am also interested in justice and health care.
View all posts by Brendan Saloner →
This entry was posted in Articles and tagged effects of inequality, leisure, poverty, theorising inequality. Bookmark the permalink.

5 Responses to Leisure Inequality – What Do the Poor and Non-Poor Do For Fun?