What Does it Mean to be Poor?

Posted on September 15, 2011 by Brendan Saloner

Dismal news. As was widely reported this week, the official poverty rate climbed again in 2010 to 15.1 percent – the highest level since 1994. The already inflated 2009 rate was 14.3 percent of individuals. The report also revealed that median income slipped by more than 2 percent in 2010. Further straining families, the rate of “doubling up” (individuals moving in with other families) also increased in 2010.

The Center for Budget Policy Priorities makes the interesting argument in blog posts that the number of people in poverty would be much lower if various transfer and in-kind benefits including social security, the earned income tax credit, unemployment assistance, and food stamps (SNAP) were counted toward income in the official poverty measure. The argument is simple: although these programs are not counted as income under the poverty definition they are helping many families that are officially poor better off than they otherwise would be.

Here is a chart that makes the point: 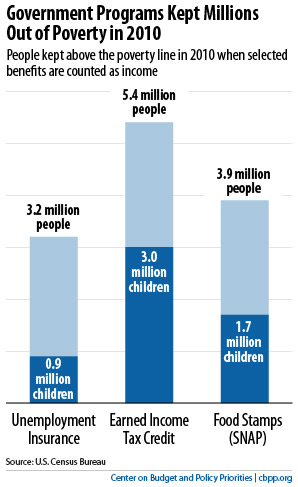 Clearly the intention of the CBPP is to spur policymakers to save these programs from further cuts. But it is a difficult rhetorical needle to thread: at the same time that these data show that poor households are being sustained by government aid, they might also indicate that the poor have more income than we typically think.

I have previously mentioned the right-wing take on poverty: many of the so-called poor appear to be living at a more middle class standard. Most of them have fridges, microwaves, televisions, and even air conditioning and game systems. There are data that support this point, and it needs to be addressed. I have not heard a clear response from leftwing commentators.

My next blog post will develop the rightwing critique in more detail and discuss the evidence for this argument. The two following blog posts will address these issues:

1. Alternative methods for measuring poverty. The rightwing commentators provide one alternative conception (although not an alternative cutoff) to the current poverty line. The Census Bureau has developed another alternative measure that factors in more transfers and subtracts out more costs of living. What is the conceptual basis for selecting a poverty measure? What normative and empirical assumptions do alternative measures make?

I am a postdoctoral fellow at the University of Pennsylvania in the Robert Wood Johnson Health and Society Scholars Program. I completed a PhD in health policy at Harvard in 2012. My current research focuses on children's health, public programs, racial/ethnic disparities, and mental health. I am also interested in justice and health care.
View all posts by Brendan Saloner →
This entry was posted in Blog posts and tagged economic downturn, food, material hardship, measurement, poverty, welfare payments. Bookmark the permalink.

4 Responses to What Does it Mean to be Poor?