Moving on – a social experiment 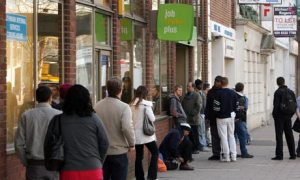 At a time of economic crisis, so the folk wisdom usually goes, any job is better than no job – no matter how badly paid or how poor the prospects. Yet perhaps surprisingly, all the talk in the UK is now about job quality: how do we create the sorts of jobs in Britain that people find rewarding, that help the economy grow, and which produce real income increases for everyone?  New Labour’s failures are now seen to be around predistribution (market rewards before taxes and benefits) rather than redistribution, to borrow Jacob Hacker’s now-popular term.

So perhaps there’s never been a better time to look at the largest social experiment ever-attempted in the UK, which tried to help people move on at work, and whose final results were revealed late last year.  In this post, I summarise the complex set of results of the experiment in the UK.

When it was set up in 2003, the ‘Employment Retention and Advancement’ (ERA) project was trying to combat a the problem of the ‘low-pay, no-pay cycle’ – that is, they would take badly-paid temporary jobs, which would then be followed by periods of worklessness. The aim was to get people into sustainable jobs (the retention part), and to get them to progress into better-paid positions over time (the advancement part). I remember writing a (badly-written) speech for John Denham MP in 2004 where he called for a set of ‘advancement agencies’, based on very much the same logic.

The novelty of ERA was what was called ‘post-employment assistance’. People went through the same welfare-to-work programmes they would normally have done, trying to get them back to work. After they got a job, though, they received voluntary extra help that tried to encourage both retention and advancement – partly through help and guidance from personal advisers, and partly through extra financial support like a training budget and an emergency fund to cover anything that might help them stay in work.  Crucially it also included cash bonuses: £400 three times a year for 2yrs for staying in full-time work, plus £1k for completing training.

What was particularly unusual was that this was evaluated using a randomised experiment – that is, of the people who took part, half were randomly put on the programme, and half were left with the existing lack of post-employment assistance. [American readers may find it crazy that UK policies usually aren’t evaluated using random experiments – but this really was a rare event, even at the height of the fashion for ‘evidence-based policy’]. Three groups were invited to join ERA – unemployed lone parents, lone parents working part-time and receiving tax credits, and the long-term unemployed (only the last group being required to receive the pre-employment welfare-to-work programme). People on average spent around two years receiving post-employment assistance from ERA, and no more than 33 months maximum.

To figure out what happened, there’s four particularly useful sources – Jim Riccio’s and Paul Gregg’s excellent presentations at a PSI event last December, the final summary official report, and the last non-summary report (of which I’ve particularly used Jim Riccio’s presentation). Showcasing the complexity of social interventions, the results were different for the three different subgroups, so it’s easiest to present these separately before coming back to a final conclusion.

Initially, many of the unemployed lone parents didn’t want to work full-time because of caring responsibilities. During the course of the programme – when the incentives were available – they earned slightly more than the control group, mainly because they were more likely to work full-time (rather than part-time) in the initial years of the programme.  After the programme ended, though, their earnings were pretty much identical to those in the control group, as the chart below (from Riccio’s presentation) makes clear. As it happens, the increased hours were particularly strong among the better-educated lone parents (A-levels and above), who earned £3.5k more in total over these 4 years. 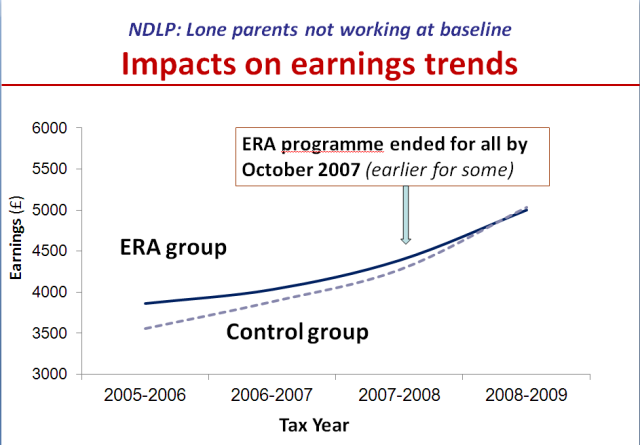 This group had to actively volunteer for ERA, and those volunteering were often attracted by the support for training – although this didn’t mean they all wanted full-time work. As in the unemployed lone-parent group, the incentives seemed to make them more likely work full-time, pushing up their earnings. BUT by the final year of the evaluation (AFTER the  incentives ended) there was no statistically significant impact on earnings – as seen in the graph below. 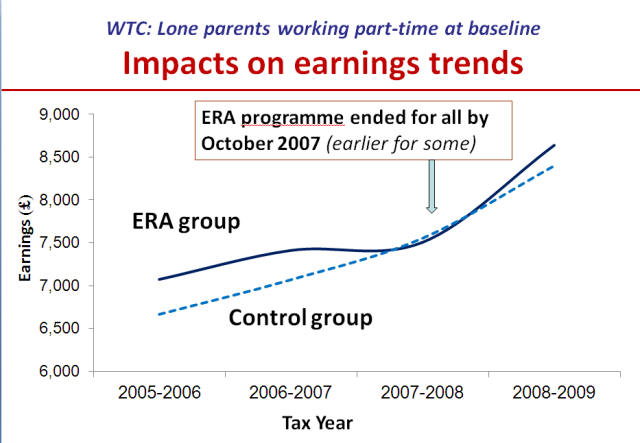 What’s really interesting here is that these lone parents (remember: they often wanted to get more qualifications) were helped to get more qualifications by ERA – there was a 13 percentage point overall increase in people participating in training/education, and a 4.5 percentage point increase in actually getting qualifications, the latter being spread across all initial educational levels.  Riccio asks why these extra qualifications didn’t translate into higher earnings, suggesting that it’s because (i) training wasn’t driven by employer demand, so the lone parents may have had unrealistic expectations; (ii) a lack of help from ERA in matching specific training to specific job opportunities. This reminded me of the ideas suggested by MIT’s Paul Osterman that I’ve previously blogged about, where the critical step is constructing a ladder between jobs rather than leaving it to people themselves.

The long-term unemployed group – which mainly included older men – tended to work full-time anyway if they got a job, unlike the lone parent groups; many people didn’t really want to keep contact with the ERA services after getting a job. Still, the effect of ERA on this group was the sharpest and most sustained out of any of the three groups, as shown below:

Statistically significant effects were found across a whole range of outcomes: 2.2 percentage points (pp) more likely to have ever-worked across the five years, 1.1pp increase in total months worked, £350/yr increased earnings after ERA ended, 2.4pp reduction in receiving Jobseekers Allowance at the end of the fifth year etc.

However, Sianesi’s evaluation – the last pre-summary report – notes a word of caution here, as there are no signs that ERA had any impact on earnings among those actually working; it just raised the numbers working per se. Some caution is needed here (it’s actually a huge methodological challenge to look at the impact on earnings, as different groups of people work in the intervention and control groups), but Sianesi’s evidence seems to be convincing.

Drawing this all together

The bottom-line question then: was it all worth it?  Can we really get people into better-paid jobs by offering in-work support?  And does it pay-off for Governments to be doing this?

The answer to this is mixed, depending on which people we’re talking about.

As the main summary document concludes, “The ERA findings underscore the difficulty of achieving long-term improvement in employment retention and advancement.”  The Osterman is one model of improving this; but the other alternative is to try and change the jobs themselves rather than the individuals in them, and this is where a policy agenda seems to be emerging. We’ll return to this over the coming months and years.

I am a Senior Lecturer in Sociology and Social Policy at the School of Social Policy, Sociology and Social Research (SSPSSR) at the University of Kent. I also helped set up the collaborative research blog Inequalities, where I write articles and short blog posts. I have a wide range of research interests, at the moment focusing on disability, the workplace, inequality, deservingness and the future of the benefits system, and the relationship between evidence and policy. You can find out more about me at http://www.benbgeiger.co.uk
View all posts by Ben Baumberg Geiger →
This entry was posted in Blog posts and tagged employment, experiments, welfare payments. Bookmark the permalink.

3 Responses to Moving on – a social experiment