Why don’t we want to pay unemployment benefits? Pt.2

This is part two of my duo of posts on why support for unemployment benefits seems to have crashed over the last 15-20 years. Last time I focused on what’s been going on in people’s heads. I argued that people have developed a host of negative associations around the word ‘benefits’, and that most people’s thoughts about unemployment support are unavoidably coloured by these associations. This time I’ll press on to try and address why this has happened. First, where have these negative associations come from? And second, why have they come to taint the perception of almost all ‘people on benefits’?

Before I do that though, I should probably mention a bit more about what these negative associations actually are (though most of our British readers will probably already have a fair idea): With a few variations, the general stereotype of a ‘person on benefits’ is someone aggressive, probably rough-looking, and with a surly sense of entitled hostility towards working for a living. This is basically a mutant offspring of the pre-existing middle class stereotype of the manual working classes. In looking for the origin of version 2.0 of this stereotype, we could therefore probably do worse than looking to the recent changes in Britain’s class structure.

The last few decades have seen the steady collapse of the traditional British working class, thanks in large part to the decline of the mining and manufacturing sectors. Whole areas of the country have been devastated by this process. Places where, had things been different, most people would have been employed in the local pit or factory, are blighted by frequent and persistent unemployment. What seems to have happened is that the negative stereotypes already attached to working class people have transferred to this new ‘underclass’ of non-working poor; shorn of whatever redemptive, romantic power attached to the actual doing of physically demanding work.

The next question is why this stereotype now taints such a diverse range of people on unemployment benefits. Why, when we think of ‘people on benefits’, does this stereotype leap so easily to mind? Why do we not think of, for example, people who are claiming benefit temporarily while they struggle to find work? This seems particularly unfair considering that a massive economic crisis has just seen many people lose their jobs.

One obvious proximate culprit for re-wiring people’s thinking about benefits is the way they are discussed by government and the mainstream media. When was the last time you saw a positive message about benefits? As Ben highlighted in his posts, the subject is almost always raised to either talk about people cheating the system, or to discuss ways to ‘get people off benefits’ – with the implicit assumption that they don’t actually want to do it themselves. We don’t hear about the people who are temporarily unemployed and need something to tide them over. This is despite the fact that they are by far the majority of all unemployment benefit claimants – you can see from the pie chart below that, on average, less than 20% of claimants during 2011 had been claiming for more than a year (data from this ONS report; see table CLA02). 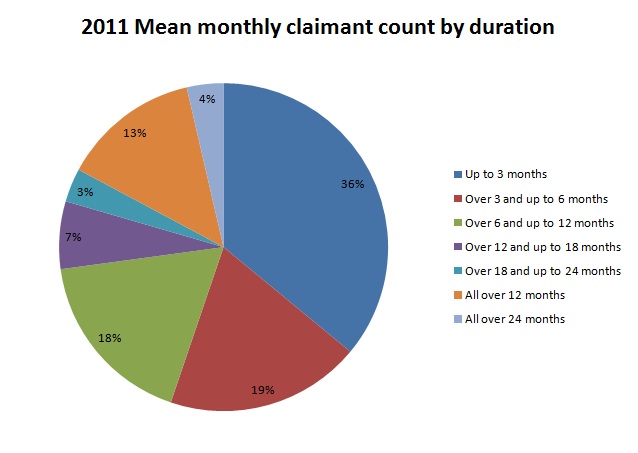 The reason for this omission is fairly obvious. What the majority of people do is boring. It is nothing to get self-righteously angry about, so it doesn’t sell newspapers and it doesn’t win votes (at least not from the kind of people who like to be self-righteously angry about things). Contrast this with the U.S., where there seems (at least from an outsider’s perspective) to be much more focus on getting unemployment down by creating jobs, rather than bybadgering the unemployed. From both ends of the U.S. political spectrum the arguments are about how the government should go about creating jobs (take a look at this analysis of the Republican primary debates and see how much discussion there is about job-creation as opposed to welfare and benefits).

Some of this may be down to cultural differences, but perhaps more is due to differing responses to the mid 90’s/early 2000’s economic boom. The U.S. has a considerably weaker welfare state, so there is inevitably less media focus on its outcomes. However, in Britain, the Labour government reacted to high boom-time employment by really focusing in on those who remained unemployed; trying to get them off unemployment benefits. This was to the exclusion of any more positive message about any other claimant group. The mainstream media, hardly reticent when it comes to demonising parts of society it doesn’t like, followed this focus enthusiastically, thereby spreading and reinforcing the invidious stereotype about benefit claimants.

Through this confluence of factors – the collapse of the traditional working class, and the focus of the Blair/Brown government on ‘getting people off benefits’ – and with the assistance of the strident right-wing media, we’ve ended up stuck in this particularly negative model of thinking about ‘people on benefits’. This has coloured people’s opinions about unemployment, and hampered our ability to reduce inequality and to fairly and effectively distribute welfare.

This has been a simplified story of what I think has been happening in the British psyche over the last couple of decades. It’s really just a best guess, and I’d be really interested to hear what other people think: What have been the most important processes in shaping people’s perception of benefits and the people who claim them?

3 responses to “Why don’t we want to pay unemployment benefits? Pt.2”