Bringing Religion Back into the Study of Health Inequality 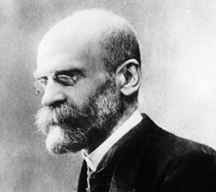 It’s a story that is recounted in every introductory sociology course: in the 1890s Emile Durkheim conducted a groundbreaking study to understand the variations and causes of suicide within industrializing French society. As Durkheim discovered, religious affiliation was a major explanatory variable – specifically, Protestants were much more likely in his sample to commit suicides than Catholics, a finding he attributed in part to weaker social control among Protestants.

The spirit of Durkheim is alive and well in social epidemiology, but the study of religion as a moderator of health outcomes is a relatively niche topic today compared to other social cleavages like social class, gender, race/ethnicity, and community context. The leading textbook on Social Epidemiology, for instance, dedicates chapters to each of these topics, but religion garners only scant mention. I came to this realization recently when I wanted to answer a relatively simple question: is the gradient between health status and income flatter for some religions than others in the United States? More on this in a moment, but first let me make very briefly the case for renewed attention to religion.

Religion as an Important Predictor

Second, there is lots of evidence that greater religious involvement overall reduces the risk of morbidity and mortality. For example, a cohort of older adults (ages 51-60) in the Health and Retirement Survey was interviewed in the early 1990s and then 8-year mortality data were linked to those records. After controlling for a range of sociodemographic variables, individuals that never attended religious services had 90 percent higher mortality risk than frequent attenders, and infrequent attenders had 28 percent higher mortality risk. This is a consistent finding in studies of more select samples (such as the Alameda health study). Explanations for these differences are manifold. People that identify as religious may have stronger social ties, greater self-efficacy, fewer risk behaviors, or these differences may reflect residual inequalities in social context.

The third reason to pay particularly close attention to religion in the study of health inequality is that religion is changing greatly in America. As the Pew Forum argues, American religion is a “very competitive religious marketplace.” In a 2008 survey, Pew found that 28% of American adults had left the faith that they grew up in. The fraction of people with no religious affiliation has increased over time, because some of these people are dropping out of the religious marketplace. At the same time, certain faiths are gaining adherents and others are losing them. The ranks of the self-identified evangelical Protestants have more than quadrupled since 1990. Demographics also play a role, many people have left the Catholic Church, but their places have been taken by recent immigrants from Latin America and by new births of U.S. Catholics.

What do the churning religious identifies of Americans portend for health inequalities?

This paper by Allison Sullivan, which also uses data from the HRS linked to mortality, finds that mainline Protestants and Jews have the lowest mortality of all groups. This survival advantage is partially, but not entirely, explained by more favorable socioeconomic status such as higher education. More frequent religious attendance explains the mortality difference between those with and without religious affiliations, but it does not explain the gap between different religious denominations. Interestingly, Sullivan also does not find that more favorable health behaviors explain mortality differentials, except among evangelicals.

Of course, it is difficult to extrapolate from this kind of associational study to the question of how the changing profile of American religions will impact overall health, and gradients in health. First, we need to be able to separate the health advantages or disadvantages of belonging to a particular sect from birth to those that might accrue later in life. People that switch religions may do so for a wide array of reasons that are associated with health status, such as moving to a different part of the country. Second, we still only have a sketchy idea of how religious affiliation differs among subgroups in religions. For example, Catholics are a very heterogeneous population in the United States, and trends in health among Catholics of European descent are not likely to represent those of Latin American descent. Finally, and most significantly, we need to have a better sense of whether religion acculturates people to different health behaviors. The example on my mind is Mormonism, where strict abstinence from alcohol and tight-knit social bonds are common. Not surprisingly, devout Mormons have among the highest life expectancy in cohort studies.

Both religious affiliation and religious practice are important explanatory variables for health inequalities, and both need to be better captured in population surveys. Tracking religion and health in longitudinal cohorts could do more to help us understand how changing religious affiliation and practice shape health over time, for example, whether there are critical periods in personal development. The vast shifting landscape poses an interesting natural experiment, as populations that have not historically been “exposed” to certain religious practices may shift into those groups. Who benefits from this shift, and who may experience health decrements? We should get a better handle on this question by studying differences in health status over time across subgroups of new joiners to some of the growing faiths.

(Note: what got left on the cutting room floor this week are some very rough calculations I did using the GSS to look at self-reported health across religious groups, and then separately for college graduates and high school dropouts in each group. I am glad to present this another week if you are interested)

I am a postdoctoral fellow at the University of Pennsylvania in the Robert Wood Johnson Health and Society Scholars Program. I completed a PhD in health policy at Harvard in 2012. My current research focuses on children's health, public programs, racial/ethnic disparities, and mental health. I am also interested in justice and health care.
View all posts by Brendan Saloner →
This entry was posted in Blog posts and tagged health, religion, social determinants of health, theorising inequality. Bookmark the permalink.