Has the work ethic declined because of the welfare state?

I don’t think that the claims of ANY of the papers stand up to critical scrutiny (!). But in the process of taking these claims apart, we can see something more interesting about the work ethic and the welfare state over time and across countries. In this first post, I look at trends over time; next week, I come back to looking at the work ethic in different countries (including trends in different countries).

So what has been happening to the work ethic in welfare states in the recent past?  Well, underlying the Daily Mail headline “Benefits ‘wrecked the British work ethic,’ new study claims” is a study by Michau 2009 (based on this LSE paper). This makes claims about the ‘work ethic’ based on a single question in the World Values Survey:

“Please tell me whether you think it is always justified, never justified or something in between to claim government benefits to which you are not entitled”

So even as we start, it’s clear we’re not talking about the ‘work ethic’ in the way that we’d usually understand it – this is about attitudes to benefit fraud.

Now, Michau wants to make claims about changes over a long period of time, but only has data in 1980, 1990 and 2000 for 18 countries. So to find a ‘trend’, he looks at different attitudes to benefit fraud by age. The results are shown in the Figure below – and show that younger people think it is more justifiable to cheat on benefits. 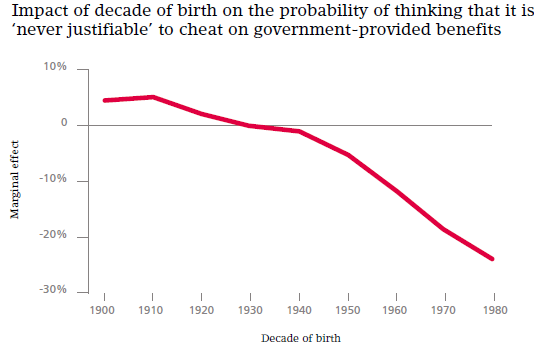 The problems with the killer figure…

There are three problems with these claims though:

In fact, if we look directly at trends, then Esser shows slightly rising employment commitment 1989-2005 among both men and women (p95-6; I discuss Esser’s measures and findings more next week).

We know, for example, that there have been huge changes in attitudes completely unrelated to the welfare state – such as widespread rises in criminal behaviour in the late 20th century and increased individualism – and these could easily explain any trend in attitudes. When noting the benefit cheat attitude trend in countries with weak welfare states (below), Michau notes that “work ethic is certainly affected by many factors beyond the generosity of the welfare state” (p33), but he never really considers this properly.

(This seems to use Ljunge 2011:614 that makes similar if more muted claims based on the same analysis for 95 countries using the same data – but also makes some inferential leaps in seeing increased sickness benefit claims as a sign of changing benefit attitudes, rather than (say) fundamental changes in the nature of work).

Next week I’ll show how Michau’s claims seem a bit puzzling when we look at the work ethic in different countries – and try to draw all this together into a coherent picture.

I am a Senior Lecturer in Sociology and Social Policy at the School of Social Policy, Sociology and Social Research (SSPSSR) at the University of Kent. I also helped set up the collaborative research blog Inequalities, where I write articles and short blog posts. I have a wide range of research interests, at the moment focusing on disability, the workplace, inequality, deservingness and the future of the benefits system, and the relationship between evidence and policy. You can find out more about me at http://www.benbgeiger.co.uk
View all posts by Ben Baumberg Geiger →
This entry was posted in Blog posts and tagged cross-national research, employment, political attitudes. Bookmark the permalink.

2 Responses to Has the work ethic declined because of the welfare state?