In this guest post, the writer/researcher and author of ‘The Cost of Inequality’ Stewart Lansley looks at the link between equality and economic stability – building on Rob de Vries’ earlier two posts on the blog.

According to current economic orthodoxy, inequality is a necessary condition for economic progress. Higher rewards and lower taxes at the top, it is claimed, boost enterprise and deliver a larger economic pie.

It is a theory promoted by a small group of post-war, pro-market thinkers and then put to the test from the early 1980s, notably in the UK and the US, with both countries allowing the income and wealth concentration to return to inter-war levels. So has the 30-year long experiment worked as predicted by the theory?

The answer is no. The income gap has surged in both countries but without the promised pay-off of wider economic progress. Both have ended up with more polarised and much more fragile economies with lower growth and productivity rates and much higher unemployment compared with the immediate post-war era.

Not only has inequality failed to deliver faster growth, there is a strong historical association with greater instability and economic breakdown. The 1929 and 2008 Crashes were both preceded by sharp rises in inequality. In contrast, the most prolonged period of economic success and stability – from 1950 to the early 1970s – was one in which the income gap had been falling. The three post-1979 recessions have been deeper and more prolonged than those of the two post-war decades ( chart 1 ).

Association is one thing, causation is another. To establish whether the rise in inequality also played a key role in 2008, consider the economic impact of changing ‘factor shares’ – the division of economic output between wages and profits. Throughout the 1950s and 1960s the division remained roughly constant with wages in the UK settling at an average rate of 59% of output, higher than in the pre-war era.

The wage share then rose sharply but briefly to a historic peak of 64.5% in 1975 before beginning a long-term slide, reaching 53 per cent by 2007.  The US experienced an even deeper fall in its wage share over this period.

According to market theorists, this shift in the division of output in favour of business and a small financial and corporate elite would deliver an investment boom and more robust economies. Instead, it has created a structural imbalance that has made nations much more prone to crisis.

But why does inequality lead to instability?

The vulnerability to crisis is because of three key reasons. First, an excessive income gap stifles purchasing power and prevents economic output being sold. In both the UK and the US, the solution to this problem was to pump economies full of private debt. None of this prevented recession, it just delayed it. The same factors were at work in the build up to 1929.  [Rob explores the falling wage share and economic instability in this post]

Secondly, concentrating income in fewer and fewer hands creates ‘bubble economies’. [This is the argument Rob explores further here].  From the early 1990s, the surge in inequality created a giant mountain of global footloose corporate and private capital. Instead of boosting investment, these ‘surpluses` contributed to the  bubbles – in housing, property and business – that eventually brought the global economy to its knees. Again there are striking parallels with the 1920s when swelling surpluses created the property and stock market bubbles that triggered the 1929 Crash.

Not only did the growing income divide help to drive the global economy over the cliff in 1929 and 2008 it is now prolonging the crisis. UK wage-earners today have around £100bn less in their pockets than if the cake was shared as it was in the late 1970s, a  massive demand squeeze that is the real cause of the lack of recovery.

[This final point is linked – but separate to – Rob de Vries’ suggestion about the wider implications of a decline in civic morality, when he says:

“The attitude, particularly at the top financial institutions seems to have basically been ‘Do everything you can get away with’. Don’t worry about the risks to investors or the wider economy – if it makes a profit, do absolutely everything that is not specifically and harshly regulated against.”]

The lesson of the last thirty years is that economies  that allow the richest members of society to accumulate a larger and larger share of the cake brings a dangerous mix of demand deflation, asset appreciation and a long squeeze on the productive economy that ends in economic turmoil. Despite this, the best evidence is that the income gap in the US and the UK has continued to grow through the crisis ( chart 2 ). 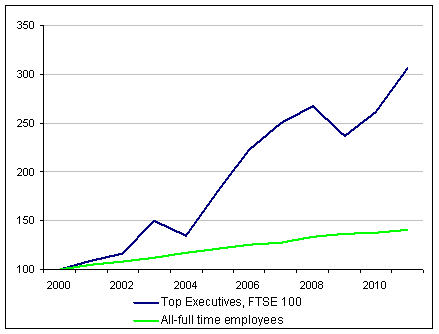 A model of capitalism that fails to share the proceeds of growth more proportionately is not sustainable. Yet in the UK since the 1980s, the role and impact of inequality has played at best, a marginal role in economic decision-making, with the macro-economic impact of changing factor shares completely ignored by the Treasury and the Cabinet Office.

So what should we do about it?

No single economic forecasting model in the UK incorporates the impact of changes in the distribution of income on vital outcomes like private investment, living standards, overall demand and key asset prices. Yet the question of ‘factor distribution` ought to be central to strategic economic thinking, with a new set of economic indicators – pay ratios, the wage share, the concentration of income – added to those such as inflation, productivity and growth.

Each indicator should be given a target that is compatible with economic stability. Thus the wage share target should be set at the average of the two post-war decades – 59%  – a level that brought sustained stability. The share of income enjoyed by the top one percent currently stands at above 15%, well above the level consistent with stability. The pay gap between top and the bottom is more than four times the typical pattern of the 1950s and 1960s.

When the targets are breached – as they clearly are at the moment – policy needs to be adjusted accordingly. Until the failings of the current orthodoxy, and the real causes of the crisis are acknowledged, we risk being locked into a prolonged era of instability and stagnation.

This entry was posted in Articles and tagged economic downturn, effects of inequality. Bookmark the permalink.

3 Responses to Why more equal societies have more stable economies