The positive and negative consequences of the welfare state

In a previous post, I argued that people had exaggerated the extent to which public support for the benefits system had fallen in Britain. Here, I want to look at another aspect of this that also came out recently – how far we think the benefits system causes negative consequences for the economy and society. In particular, I want to look at a fascinating new paper by one of Europe’s top social policy academics, Wim van Oorschot (with the excellent Tim Reeskens and Bart Meuleman), that challenges how people think about the welfare state in more generous countries.

Increasing negativity about benefits in Britain

The media coverage of the recent British Social Attitudes report drew on a wide number of measures, and while I discussed some of these previously, I missed out the view that the welfare state had negative social consequences.  As the Daily Mail reported, “…a resounding 62 per cent say unemployment benefits are too high and discourage work”, showing a sharp rise since 1997, and a corresponding decline in people saying that unemployment benefits are too low and cause hardship.

[The Mail went on, “These are not the findings of some Right-wing think tank with an axe to grind. This is the Government’s own research, funded by the Department for Work and Pensions. Yet the widely-held views voiced in the BSA survey are either ignored or howled down by the publicly funded BBC – by far our most powerful news organisation, which has relentlessly pushed the liberal line and vilified the views of the people.”  And elsewhere, they claim this was the view about ‘state handouts’ in general rather than just unemployment benefits. I think it’s best if I don’t say anything about either of these…]

Another way that people expressed hardening social attitudes was through another question that tapped into a similar social attitude: the view that ‘if benefits were less generous, people would stand on their own two feet’ (i.e. be self-reliant). As the figure below from the BSA report shows, this increased sharply from 1997 to 2007 – and this came alongside small but increasing numbers disagreeing that benefits cuts ‘would damage too many people’s lives’.  It worth noting however that OTHER views on negative social consequences don’t seem to show the same pattern; people are increasingly LESS likely to agree that the welfare state encourages people to stop helping each other. As we saw last week, there’s a quite consistent divide between stable support for talking about the ‘welfare state’, and more negative attitudes for some aspects of ‘benefits’ (particularly around unemployment benefits). 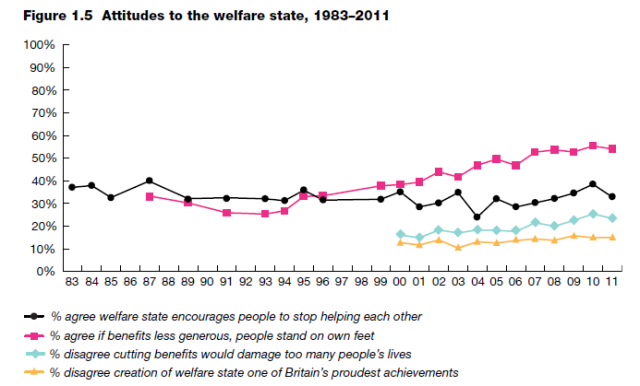 The consequences of social benefits in Europe

What I really wanted to draw attention to, though, was how such attitudes vary across Europe. You might expect that in more generous welfare states, people have much more positive views and therefore believe there are fewer negative consequences – but in general, if you were to think this, then you would be wrong.

This comes out from a great recent paper by van Oorschot, Reeskens & Meueleman (available free here) using the 2008 European Social Survey.  They group the perceived consequences of social benefits/services into three: negative moral consequences (e.g. makes people lazy), negative economic consequences (e.g. too great a strain on the economy), and positive social consequences (e.g. prevents widespread poverty).  When they compare all of these across European countries, they get the following picture:

Taking in everything in this picture is tricky, but there’s two things to draw out of this.

Firstly, in general it is not true that countries where people think there are more positive consequences also think there are fewer negative consequences.  If anything, they both go together – particularly for some particular dimensions of this (e.g. countries where people say social benefits help prevent poverty are also those where they say that they stop people helping one another). Likewise at the individual level, people who see more negative consequences of the welfare state are not necessarily those who see fewer positive consequences.  (In a separate paper by van Oorschot with Roosma & Gelissen (DOI)), Western Europeans seem to be either positive or negative about the welfare state in general, while Eastern Europeans are positive about the goals but negative about the delivery).

What’s really interesting here is that countries that spend more money on social benefits perceive MORE negative consequences of the welfare state – but substantially more positive consequences too (Table 4 in the paper).  As the authors say, “a higher spending welfare state promotes its social legitimacy by stimulating in people the idea that it is doing a good job, more than that it arouses their worries about its effect on the economy and morals.”  For me, this suggests that trying to combat negative perceptions of benefits is not the best way of trying to get support for higher spending; rather, the aim is to focus on what social benefits can achieve when they’re done well.

Secondly, it’s striking how much of an outlier the UK is.  In general, we see social benefits as having more negative net consequences than any countries bar Hungary and Slovakia – and we see the highest level of negative moral consequences out of any of the ESS countries.

Unlike my earlier post, then, I am not here arguing that attitudes in the UK are particularly resilient or positive.  But the complexity of people’s attitudes is important when we try to analyse just what it is about public attitudes that has become harsher, and what we can do to combat it.

I am a Senior Lecturer in Sociology and Social Policy at the School of Social Policy, Sociology and Social Research (SSPSSR) at the University of Kent. I also helped set up the collaborative research blog Inequalities, where (after a long break) I am again blogging about inequality-related policy & research. I have a wide range of research interests, at the moment focusing on the role of social science, disability, inequality, deservingness, and the future of the benefits system, and I co-lead the Welfare at a (Social) Distance project (on the benefits system during Covid-19). You can find out more about me at http://www.benbgeiger.co.uk
View all posts by Ben Baumberg Geiger →
This entry was posted in Articles and tagged cross-national research, political attitudes, welfare payments. Bookmark the permalink.