Apprenticeships in a Volatile Labor Market 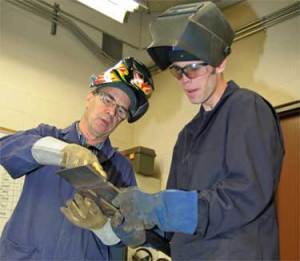 When people talk about what it takes to succeed in the labor market today, they may talk about having the right connections or a college degree, but they rarely talk about apprenticeships. Most people in the United States (including many analysts and policymakers) assume that people that want to further their training will enter college after high school, but alternatives such as spending several years training under a skilled craftsperson are not discussed as viable alternatives to a college education. For many, the very idea of apprenticeships either evokes the silliness of Donald Trump’s network reality television show or the quaintness of a bygone era.

Yet there are some serious reasons to consider apprenticeships as one important investment in the skills of American workers.

The case for apprenticeships has been laid out out over several years by Robert Lerman, a senior fellow at the Urban Institute (and a former colleague of mine). As of 2008, about 27,000 registered apprenticeship sponsors were training about 480,000 apprentices (mainly entry level workers) in the United States. Lerman points to several potential benefits of apprenticeship programs, for the trainees, the supervisors, and for future employers.

For the trainees one of the main benefits is in developing a broad set of skills without facing the pressure to immediately perform at a level of proficiency. He states: “apprenticeship helps workers to master not only relevant occupational skills but also other work-related skills, including communication, problem-solving, allocating resources, and dealing with supervisors and a diverse set of co-workers.” While these kinds of non-cognitive skills can also be acquired in other settings, including military service and informal employment, the structure and design of an apprenticeship program fosters more personal development for individuals that may enjoy working with their hands but lack the qualifications or desire to attend college. At its best, an apprenticeship provides the discipline and focus of a college education, while equipping a person to enter a relatively high paying profession.

For employers, especially in sectors requiring skilled tradespeople, there are substantial benefits to hiring apprentices. In particular, apprentices are able to transition into difficult jobs, require less supervision, and have been previously vetted during their training process (removing some of the uncertainty from hiring new workers). Many of the high growth jobs in the United States are ones that require skilled trades such as advanced manufacturing, weatherization and environmental jobs, and medical technicians.

Still there are some important questions to ask about apprenticeships. First, if apprenticeships are a good economic proposition why are employers not already investing in these programs? In fact, some of the resources and energy for these programs are coming from employers, but there is arguably a large role to be played by labor market intermediaries such as technical schools, which can help to facilitate better matching, disseminate curricula, and certify the skills of trainees. These types of functions are performed on a much larger scale in European countries, including Germany, but the German labor market is less flexible and workers are less likely to churn through jobs (meaning that employers have more of a guarantee that they will get a positive return on the upfront cost of training a worker).

Second, are apprenticeships a risky investment for workers in a rapidly changing economy? One reasonable concern is that workers will train for professions that experience large expansions and then dramatic reductions (such as the construction industry in the last decade). Because apprenticeships prepare workers for fairly narrow careers investing in training may be “putting all the eggs in one basket” (by comparison a college degree is fairly general and allows people to move flexibly through the knowledge professions). To provide more security for workers, measures can be taken to build more all-purpose technical skill training into the apprenticeship curriculum (for example, making sure that all ship-building apprentices gain a certification in welding and basic plumbing).

Creating a much broader and better-funded national apprenticeship program will not address some of the important structural problems in our economy, nor can it make up for all of the pressures of offshoring and declining unionization, but it can be an important pathway into the labor market for many high school graduates that are talented and hard-working, and could use some additional support and mentorship before beginning working life.

3 responses to “Apprenticeships in a Volatile Labor Market”