Over the past twenty-five years, there has been a major and widely-reported change in British attitudes towards benefit claimants: simply put, we are less positive about benefit claimants than we used to be. More of us think that ‘large numbers falsely claim’ or that ‘many claimants don’t deserve help’, and attitudes have become particularly hostile to unemployment benefit claimants, as has been repeatedly catalogued in the annals of NatCen’s British Social Attitudes (BSA) survey.

But suddenly, there is a sign that this might be changing. In the 2016 survey, published today, there was a sharp decrease in how much benefit manipulation – questionable activities, which may not technically count as fraud – people thought was going on. 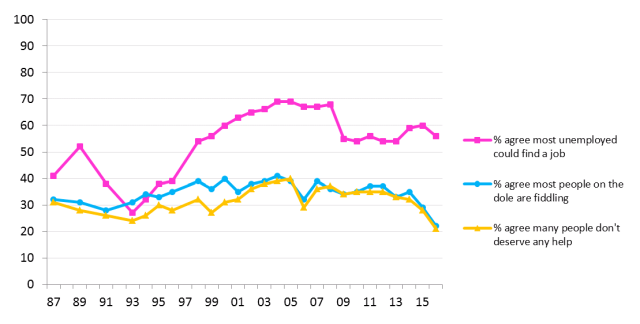 Underlying data given in the appendix our chapter in this year’s BSA report.

The double standard in thinking about tax vs. benefits fraud was the focus of our BSA chapter, as Aaron Reeves has written about here. But in additional analyses for this blog post, we see that the change in wider attitudes to benefits is less marked. There is little systematic change in people’s desire to spend more on welfare benefits for the poor (35% want this in 2016, similar to the 34-36% in 2013-14), even if there has been a rise in the numbers saying that we should increase taxes and spend more on health, education and social benefits (rising 37% to 48% 2014-2016, and now at its highest level since 2004). So there seems to be a specific change in how people think about benefit claimants, rather than a general shift in attitudes towards the benefits system.

While the latest data relate to Jul-Oct 2016, the first question that comes to mind after the 2017 election is: is this a Corbyn effect? The short answer seems to be ‘no’. Indeed, if anything, the changes in attitudes have been slightly greater among Conservatives than Labour supporters, and among older people than younger people, although the attitudes of all groups seem to have changed, as shown below: 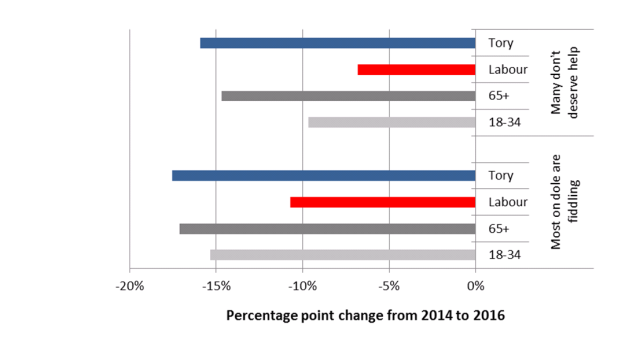 A final word of caution

Two final words of caution are needed here. Firstly, we will need to examine the results of the 2017 survey (which is about to go into field) to see if these changes are sustained – the smaller drops in 2006 now look like a one-year aberration, as does the softening of attitudes in 2013. But if so, this may indicate an important change in the way the public thinks about benefit claimants.

While waiting to see if the trend is confirmed, we should remember that even without a major shift, attitudes are not as negative as they are often portrayed to be. And looking at times and places where more generous benefit systems are popular, it is clear that people are fundamentally ambivalent about benefits system, and what varies is the balance between the positive and negative aspects of this ambivalence, as I argue

This post was written with Rob de Vries and Aaron Reeves (my two co-authors on the British Social Attitudes chapter), and was also simultaneously published by the NatCen blog.

I am a Senior Lecturer in Sociology and Social Policy at the School of Social Policy, Sociology and Social Research (SSPSSR) at the University of Kent. I also helped set up the collaborative research blog Inequalities, where (after a long break) I am again blogging about inequality-related policy & research. I have a wide range of research interests, at the moment focusing on the role of social science, disability, inequality, deservingness, and the future of the benefits system, and I co-lead the Welfare at a (Social) Distance project (on the benefits system during Covid-19). You can find out more about me at http://www.benbgeiger.co.uk
View all posts by Ben Baumberg Geiger →
This entry was posted in Blog posts and tagged benefits, politics of inequality, public opinion, welfare payments. Bookmark the permalink.